No injustice can happen without the negligence or connivance of senior bureaucrats. They must stick to their duty for what they are appointed.

Puducherry medical seats repeated (year to year) Fiasco is testimony of criminal acts now under investigation by the CBI and administrative negligence now under inquiry by the CVC.

None of this was/is possible without acts of omission and commission of senior officers posted in various linked departments or supervisory and coordinating positions.

All officers are in position of responsibility to uphold the law and serve the people while following the law in letter and spirit.

Breakdowns and violations happen only when the seniors in position of responsibility decide to concede out of fear of annoying seniors or for favour of any kind.

When it comes to the stage of inquires and investigations no recorded instructions are invariably found on the file as is the experience. It's all verbal.

It is the lower functionaries who are left to fend for themselves.
Moral of the story for public officials is to perform their duty as per the law.
And in the interest of people and not vested interests.
Remain non partisan.
Do justice, not injustice. Be available to people and listen to their grievances.
And defend their lawful right.
If public officials will not do, where do the people go?
Justice is expensive and also takes time. Meanwhile people unduly suffer.
We public servants are there to ensure administration runs on equity and justice.
None of the past scams of 2G, Coal Scam, CWG and others could have happened had the public officials not conceded their responsibility out of fear or for favours.

The Court Judgements are evidence of this.
I believe developments in Puducherry are good for the future of Puducherry. It will secure its scarce resources for appropriate use.

Public activism and Panchayat elections too must happen.
This will keep into focus the way the UT is administered and hopefully keep it under close watch of all agencies concerned.

This Criminal Negligence has impacted the whole of Puducherry.

The outlying UT of Puducherry needs a close watch by GOI and central agencies on its administrative & financial performance with integrity, accountability and transparency. With expected surge of finances due to Smart city and several other Infra developments in the pipeline the UT despite its geographical distance and away from capital media gaze, must be kept under close scrutiny.
CAG at the end of the year when money is lost and damage done is not enough. It has not served the real purpose. Officers retired and politicians gone in many cases. GOI must do active mid year reviews and social audits and correct early before damage is done. Officers too need to be rotated to check in-breeding and over familiarisation with vested interests. We have to save Puducherry from all forms of exploitation to protect its people. Most of all encourage opportunities for next generation of leadership thru Panchayat elections and rural as fresh leadership to emerge.
Puducherry needs courageous activism in ensuring administrative performance and financial integrity.
Also in using its limited resources optimally, skill and upskill, while protecting its pristine natural and spiritual heritage.
Time for integrity and missionary activism.
#SavePuducherry from vested interests.


Above criminal and administrative negligence has caused huge pain and disillusionment amongst people of Puducherry.
To prevent these from reoccurring we need to put in place systems of prevention, watch, inquiry, investigation, justice and fear of being caught and exposed. Kiran Bedi.
Posted by Kiran Bedi at 10:06 PM

Today's Judicial Order from the Honorable CJ's Court of Madras High Court ar 10.30 AM is likely to be historical not only for Puducherry but beyond.


Meritorious Students who have been denied admissions by Highly Commercial Deemed Medical Colleges demanding exhorbitant fees beyond reasonableness may be in for a jolt.

(Grapevine has it that they may go to Honourable SC for a Stay soon after the order is pronounced).
Our expectation for receiving justice is based on the kind of queries made by Honorable Judges during the hearings past two days.

Relief to students ( if it comes)
will give Precedence to Merit and Moral Authority over Commercial Muscle.
RajNivas was a respondent through its Mr Neethi Dhas, Secretary to Lt Governor, with its own Advocate as the views of RajNivas were at variance with that of Political Secretariat. ( which I believe partially changed the next day by a written affidavit to the Court).

We Pray for welfare of our students who are  the future healers of our country.

Team RajNivas went all out to secure justice for deserving students as much as they needed. We responded as a final institution of relief as its very purpose of existence.

Kiran Bedi: In RajNivas we daily work to give our maximum. Because we believe this the very reason for this Institution to be here. Kiran Bedi. 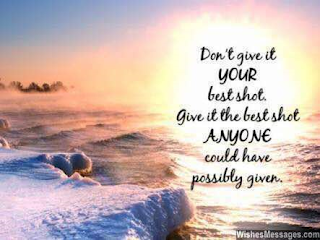 
CENTAC Students may get it today.

Keep track of orders expected by before 3 PM in Madras High Court. CJ Court I believe.
The PIL was pleaded, Pro Bono by Mr VBR Menon.  One who ONLY takes up issues he strongly feels about.

He believes that the deserving medical students have been given a raw deal by the commercialised Deemed Medical Colleges over the years.

And that the Governments of the day have not done enough to address this matter comprehensively.
Implementation of SC judgments too have been in violation in many cases.

Hence he approached the Honourable High Court for rationalisation.
Affidavit filed by Secretary to Lt Governor, a respondent in the petition fully supported Mr Menon and the Aggrieved parents.

The GOP is believed to be present, but not known what he said.
It is believed that he  has not yet submitted anything in writing. Made only oral arguments.
Yesterday the Parents Lawyer along with MCI Lawyer, Mr VP Raman, and SU Sirinivasan (representing Secretary to LG) faced a battery of highly paid, lawyers from the Deemed Universities.)
It was a Case of David vs Goliaths..!

--a 'Dharma Yudh'...
Time will tell which side is Justice?

Every day in public service there is an opportunity to serve better for those whose duty it is. Kiran Bedi.

Today in Delhi to address a conference on Civil Services.

Shall present few key practices if followed daily by public officials, will change the way they serve people.

And how resources, could be utilised to the maximum.
How problems could be prevented.
How people could get relief even without complaining.
How issues could be preempted.
How they could promote trust in the people in governance.
How people could be kept well informed and aware. So that every one, elected or selected or appointed remain accountable for the services they deliver.
Immaterial of hierarchies.
Kiran Bedi.
Posted by Kiran Bedi at 11:06 PM

We are causing this by collective failure.

This is what happens in lives of most of us. Speaking about public officials endowed with responsibility and powers to serve people, we merely go through life.


We keep getting and seeking positions and keep going through them without growing in them by serving with courage and conviction When we merely go through positions of responsibility, we cause enormous suffering to thousands+dependent on us.

Like the CENTAC matter right before us there days.
Unless we experience this pain personally we will continue to cause and spread suffering.
We will be living through life without growing in it.
Our public service careers either empower or disempower people.

Regret to say so.
The CENTAC case is one ripe example.
And we are all collectively responsible for the pain and suffering our children and parents are going through. There is no cause for any celebration whatsoever. It's time for course correction. 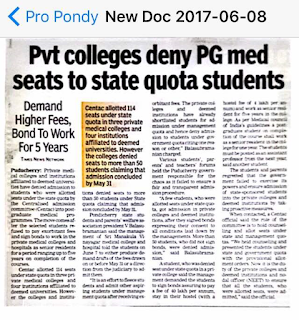 Change is the law. Growth is optional. Choose wisely

'Change is the law. Growth is optional. Choose wisely.'
I made mine when I accepted to be here.
Am here for a higher purpose. Not a job or a position. But to do good and serve the UT. Ensure clean, secure and a just Puducherry for all. (Not few)
Due to which RajNivas and its Team, remains accessible to anyone in need. All 7 days of the week through all methods. Personal or electronic.
This is what RajNivas is for.
Not a day has been lost. Not even a weekend. Including early mornings of all weekends.
For Team RajNivas it's a sacred duty to serve and spread joy and a sense of belonging across all sections of society. It shall remain so.
Assuring people of Puducherry that
Team RajNivas will continue to Bike for a 'Swachh Puducherry' and more...
Kiran Bedi.

Who tells Honorable CM what the laid down responsibilities of a Lt Gov of a UT are? It also depends on what he wants...

So what does the Honorable CM want?

A Rubber Stamp or a Responsible Administrator?

Is the real Question.
The CM according to this news desires an endorser.
One who may let wrongs happen even when people are suffering injustice. Wants an LG who clears files without seeking clarity.
One who appoints people as per whims and fancies of vested interest.
One who releases moneys even if it's not budgeted for.
Hence borrow and spend.
One who promotes officers even when there are either no posts or poor  performance. Or no reason.
One who punishes officers for courage of conviction.
One who wants no news to be rebutted.
One who should do nothing and see nothing, say nothing.
Just be an onlooker. And pass time, enjoy the benefits of Expensive establishment called RajNivas.
Stay isolated. Do not meet people. Do not question officers. Do not interfere.
Just do as he tells, even in writing.
(I have received several such letters from him).
Most of all the CM wants me to get lots of money from Government of India, even when they can't spend well what they have. Even when revenue generating tourism is loss making.
This is called Wishful Thinking. Instead of introspection.
In reality he can feel empowered and enthused that there is someone here to help him clean up the mess in his Puducherry.
It's mine only now by adoption. It is his by birth.
He can instead feel good that he has someone willing to raise the social consciousness of the region, one which will support him for good administration which deploys and helps enhance the energy of all responsible.
It's a question of what a CM wants.
This is the real issue.
What a CM wants and what an LG wants?
Both have their responsibilities laid down in the UT Act and in the Business Rules. It's how he reads or misreads.
Or ignores reading.
Or does not want to face the realities of the situations today.
People are crying for justice. Students and parents are crying for admissions as per the orders of Govt of India and the higher judiciary.
People are suffering and crying. Who will hear them. Only the Courts away in Madras? It's called the Madras High Court.
Raj Nivas is becoming their last hope. As per daily open house.
Puducherry needs justice, integrity and good governance.
How will they get it? Who will give them. Who will speak up for them?
Not an onlooker but someone whose heart beats for them. Someone who serves with sense selflessness. One who places people before positions.