As I watched the resurgence of Gandhi across the media, on television, and across headlines, debates, verdicts, big fights, quiz rounds, spot surveys, exhibitions, and the cinema halls, editorials and articles, something within me inspired me to complete the loop and take the Mahatma to the Police Headquarters where I believe he is needed no less. Imagining Gandhiji as a Police Chief became irresistible for me; I have let my imagination run its course in this week's article and must admit that the experience has been joyful, therapeutic and spiritual.

Since no Chief is without followers I positioned and visualized myself as being one of his juniors who observes how he plays all his roles to provide an eyewitness account of my dream. Some of the frames that flashed before the mind's eye were: his accessibility to ordinary citizens or junior ranks of the police service; or his dealing with VIPs and their innumerable recommendations, justified or otherwise; and his views on crime registration, interrogation, collection of evidence and prosecution of offenders. What would be his advice on issues of on matters of interference by politicians, bureaucrats, influential persons, and ones own seniors? And not to forget the reality of frequent transfers!

Gandhiji was the change he wanted to see in others. Truth and compassion would be the cornerstones of this Chief's philosophy and management style. His tenets and practices would include:

He was out of home daily by 8 AM visiting any one unit by prior announcement or surprise due to which all were on duty well before time. The traffic flowed smoothly and police personnel were present. Whichever unit he reached, he first listened to the staff rather than preached and ordered. He rewarded and appreciated rather than reprimand. He shared and empowered. He smiled and rejoiced and made police men and women relax and smile. He asked them of the welfare of their children and families. All saluted him out of love, not hierarchy.

When questioned on matters of the use of one's discretion he would only say, "Follow the law with compassion. Do only that which is just and fair. Spare no one but you do not be revengeful. Look after the person in your custody. He is in your care. Ensure no one uses any force against him. Use technology and scientific methods of interrogation and investigation; never attribute to him anything which is false. Remain truthful."

To the questions on how convictions would be secured if the path of truth alone was to be followed, he would smile and elucidate, "The results of following the truth cannot be worse than the present state of affairs. On the contrary since you will be believed by the courts and the people it will gradually make it difficult for the defense. This is how you will win the trust of the people. Remember you are an investigator and not a judge. Do your duty truthfully. Believe and practice righteousness and in the right means to the right end. Pray for peace for all before you go to sleep".

When asked to comment on his vacation policies, he would be conscious that many police personnel stayed away from homes for extended periods of time, and would always insist, "No leave will be denied. Take it when you think it is important for you. You know best when you can/should/must go."

On matters of civilian-police interaction, his advice to the police force would be fairly crisp and straightforward, "Keeping peace and security is your sacred duty. Involve people in policing. Let them know the areas which need greater attention and involve residents and village panchayats to self-police. Train and help them. Enroll them as special police officers. Empower citizens to understand policing and their duties by showing them the way."

On the issue of outside influences impacting policing decisions, he would exhort, "Do not get over awed by the rich and powerful. Remember you work for all. And if anyone still bullies you inform your seniors to intervene. And if they don't, follow your conscience. This is your duty. Remember we are trustees of citizens' security. It is a sacred duty."

After having gone through this pleasant, stimulating and emancipating imagination exercise, I wondered for myself, if we will ever see a real Gandhi in uniform? And the spirit of Gandhiji replied with a resounding "yes". Especially, after the recent judgment of the Supreme Court of September 22nd in which all future selections of the Chief of Police will be made from three senior most empanelled officers cleared by the Union Public Service Commission. The Police Chiefs so appointed would have a fixed tenure of two years and cannot be removed without due consultations with the Security Commission which has the Leader of Opposition as a member. No internal appointments too can be interfered with. Also, a Police Complaint Authority will be established that will spare no delinquent violating human rights. Hence the leadership will be empowered and accountable. Historical indeed! Something which was being pleaded for, for the last 20 years was finally becoming a reality.

I firmly believe the future belongs to Gandhigiri. It is just a matter of time.
Posted by Kiran Bedi at 10:24 AM 11 comments: 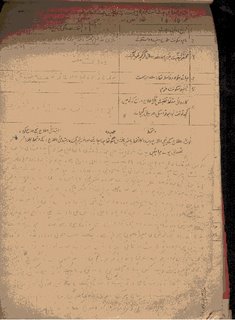 Statement of Shri Nand Lal Mehta, son of Shri Natha Lal Mehta, Indian, resident of Connaught Circus Building Lala Sarju Prasad:
Today I was present at Birla House. Around ten minutes past five in the evening, Mahatma Gandhi left his room in Birla House for the Prayer Ground. Sister Abha Gandhi and sister Sanno Gandhi were accompanying him. Mahatma was walking with his hands on the shoulders of the two sisters. Two more girls were there in the group. I alongwith Lala Brij Kishan, a silver merchant, resident of No. 1, Narendra Place, Parliament Street and Sardar Gurbachan Singh, resident of Timar Pur, Delhi were also there. Apart from us, women from the Birla household and two-three members of the staff were also present. Having crossed the garden, Mahatma climbed the concrete steps towards the prayer place. People were standing on both the sides and approximately three feet of vacant space was left for the Mahatma to pass through. As per the custom the Mahatma greeted the people with folded hands. He had barely covered six or seven steps when a person whose name I learnt later as Narayan Vinayak Godse, resident of Poona, stepped closer and fired three shots from a pistol at the Mahatma from barely 2 / 3 feet distance which hit the Mahatma in his stomach and chest and blood started flowing. Mahatma ji fell backwards, uttering "Raam - Raam". The assailant was apprehended on the spot with the weapon. The Mahatma was carried away in an unconscious state towards the residential unit of the Birla House where he passed away instantly and the police took away the assailant.

Having received the information I rushed to the Birla House to find the dead body of the Mahatma at room No. 3. Met Shri Nand Lal Mehta, his statement recorded and got confirmed after reading it out to him. Copy of the statement handed over to him. Came to know that the assailant was whisked away by the Assistant Sub-Inspector. It was a case of Section 302 Indian Penal Code. All the case papers were sent to the Police Station Tughlak Road and I got engaged in conducting investigations. A special report may be forwarded through the police station.
Sd. in English/30 January
Posted by Kiran Bedi at 8:34 AM 32 comments: