Some Q&A from my recent trip to IIM Lucknow 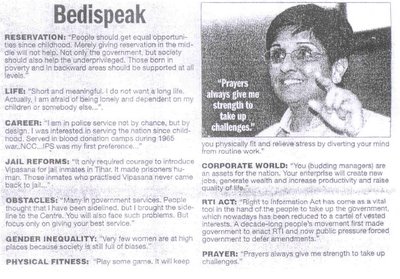 Here is some telling feedback from a recent discussion that I was witness to, among a mix of senior officers:
“If you go by the law book then what are we for?” asked a local leader of a new entrant in the police service, who was strictly going by the law book. This young entrant was determined to do what his teachers had taught him in the training academy.

Another voice said, “Some of the local representatives think that taking up popular issues alone is their primary responsibility and not legislating. They forget that the laws being followed were legislated by them.” I quote again, “Uptil 1990, the moment a riot took place, politics withdrew. Now, some actively search for a role in riots.” Said another member, “The police force suffers from a schizophrenic syndrome. It has a split culture. For survival it depends on politicians and for accountability on law. We need a clear chain of command.” A final quote: “There is a lurking fear among some seniors that if a senior DGP commands, will anyone obey? If appointments are not in the hands of the police leadership, then who is accountable?” Can such despondency brook any delay in current times? Much needs to be addressed from all possible directions. But most urgently there appears to be a compelling need to restore leadership where it belongs and clarify accountability.

Once accountability is restored to the appropriate location/position, it becomes the sole responsibility of the person to deliver the trust. The accountability is visible and fixed. Either he delivers or gets out. This, however, does not remove or even distance lines of wise counsel. They remain intact. We need not fear that. For it is equally imperative that electoral accountability stays in place. But the latter needs to draw a line. Regrettably, it is this balance that is now lost.

Often, one hears of an issue of debate titled, ‘Challenges in leadership for public servants’ . This is an amazing contradiction: public ‘servant,’ ‘leadership’, and ‘challenges’? A ‘servant’ is expected to be obeying all orders. He can be at best a good housekeeper. One who can be a good organiser, have the skills to keep the house in good shape, cook and serve well, deal with visitors and guests, answer phone calls smartly, fix appointments, keep confidentiality, do safe-keeping, attend to the aged and the needy, take care of children and even drive when there’s need. But how can he have leadership? Can he decide to renovate the house? Or repaint it differently? Or get new furniture? Or buy new gadgets? Or send the child to a different school? Or tell you what to wear? So when there is only routine work, where is the leadership which is synonymous with challenges?
Only a free person can exercise leadership. housekeepers are never free. They are expected to do as they are told to do. They can be dismissed whenever they show disobedience or indiscipline. It does not matter whether the housekeepers have the skills or not. They must wake up before the master does and sleep after the master has retired for the day. They have no right to any rest. In brief, they are slaves.

However, the housekeeper is the owner when the master is away. He can steal, entertain friends, slip away, abuse the place, sleep through, eat what he wants or can, disclose information and get away unless caught. After this kind of exposition, should we continue to address officials in public service as public servants? ‘No’, was the chorus at the meeting.

Thus, the first step to be taken is to change the nomenclature — stop calling officials in government service ‘public servants’; call them ‘public officials’. Their responsibility is to provide efficient and responsive administration. They are selected, appointed and trained officials in civil service. Once they are neither referred to, nor viewed as, public servants, these very same (whosoever chooses to belong to this group) so-called housekeepers will have to necessarily develop a whole new mindset of leadership. It is only then that they will call for challenges that are attached to the exercise of leadership. From public servants to public officials implies respecting authority without getting enslaved, taking initiatives, sharing credit, breaking the culture of control, encouraging growth, acquiring softer skills, empowering people, being trustworthy, communicating more, practising team work, having integrity and working with missionary zeal.

The biggest challenges that public officials will, and do, face is resistance from closed mindsets, vested interests, from within and without, including family and friends. But the biggest challenge will be the officer making choices for himself. The choices he will exercise based on his own attitudes and his beliefs, his own needs and own compulsions.

The choice that will have to be made by the person — to be a public servant? Or a housekeeper? Or the public official that people expect?
Posted by Kiran Bedi at 9:51 AM 65 comments: