Calls for alignment with nature..

Bedi calls for alignment with nature

Natural disasters are a product of the compromise on environmental rules and regulations as well as climate change, Puducherry Lt. Governor Kiran Bedi has said.

Talking about the floods in Kerala in the course of a press conference at the Indian Institute of Management-Kozhikode on Tuesday, she said that global warming and climate change were not sparing anyone, including the richest part of the world. “Several times, the United States of America had been hit the maximum. Climate change is not sparing anyone, the reason is the increasing population and the stress on mother earth, the stress on natural resources, water, air or land.”

Ms. Bedi said that over a period of time, with the increase in population, here had been enormous pressure on land in India. “There is high pressure on land for housing, agriculture, industry, and for institution building. Environmental rules and regulations have at many places got compromised. Many disasters are a product of this.”

She said that long-term consequences were not being explained and only short-term policies were being looked at. “As administrators, as community leaders, political leaders, we need to be in alignment when it comes to management of the environment. There are expert opinions, we need to respect them. Examine them respectfully and have a reason for their acceptance or rejection,” she said.

Both acceptance and rejection would have their own implications and only history would judge whether the reasons were right or wrong.

“There may not be any mala fide reason, it can be a bona fide error, a genuine error of understanding a situation,” she said.

Drawing lessons from the Kerala floods, one needed to be very sensitive to environment rules, the former police official said. “It is applicable not only to Kerala, but [also] to everywhere. We cannot compromise on nature, which shows its anger in a very difficult way. We need to manage the pressure on land for housing, agriculture, and industry. And, Kerala is one of the most thickly populated States in the country too,” she said.

Pointing out the difficulty in rebuilding of the rain-ravaged society, Ms. Bedi said that around 27,000 government employees in Puducherry had donated a day’s salary for the flood relief in Kerala. “It is not going to be enough. We may need more,” she added.

She said they should try to get up early in the morning and soak in the greenery around them.

“But don’t talk while doing yoga,” she said.

In a lighter vein, she requested Debashis Chatterjee, director, IIM-K, to provide mats to the students.

She encouraged the students to build “their foundation” by living each day to the fullest, prepare for the unexpected and be grateful for the present.
Posted by Kiran Bedi at 10:25 PM

My response to news appearing on what the Honble CM has reportedly said and published in the newspapers today. (Aug 6th 2018)

My response to news appearing on what the Honble CM has reportedly said and published in the newspapers today. (Aug 6th 2018)
—————————————-
By regular negative statements about the responsibility and accountability of the Lt Governor’s office and exhortations to public officials to undermine the directions of the Lt Governor, I am not sure whether the Honble  Chief Minister is realising that he is always hurting the speed of progress Puducherry, of which he is the Chief Minister.
If progress be his primary interest then he would not make such public pronouncements.
The responsibilities of the Lt Governor Office are clearly laid down under the Law and Rules. And if anyone needs to know, may please read them.
Even the recent Supreme Court Judgement about Delhi affairs the Honble  Judges have “hastened to add that it does not apply to Puducherry”. (Para 180)
I have by now spent over 26 months in Puducherry. Had the CM not weakened the collective efforts, and supported and asked his colleagues too, we would have been number one UT in India in all parameters.
I only wish to say as far as the office of Lt Governor is concerned it shall continue to follow the Law and the Rules and serve people of Puducherry to the maximum and continue to be a ‘People’s Nivas’ as their right.
As far as Public officials are concerned Senior Officers know that LG is their  ‘Accepting Authority’ as per their Performance Appraisals are concerned.
Hence their final assessment gets accepted or rejected here.
If they want outstanding reports they have to justify them by year round work. 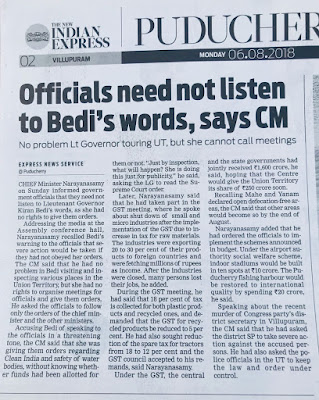